Legend of the Savage Isle

The fourth installment of the Airship Daedalus series of retro pulp adventure novels is now available in print and ebook formats from Amazon, Kobo, DriveThruFiction, and a host of online booksellers.

The story continues the adventures of “Captain Stratosphere” Jack McGraw, Dorothy “Doc” Starr, Charlie “Deadeye” Dalton, and Marissa “Cipher” Singh as they pursue the villainous forces of the Silver Star who stole priceless technology from the airship Percival, and kidnapped the former engineer aboard the Daedalus, Carl “Rivets” Holloway.

Intervening in a tribal uprising in Kenya, our heroes find a new mechanic in the form of a young Kikuyu prodigy. From there, they must deal with assassins in a Bombay market, a tropical storm over the Bay of Bengal, a car chase through Bangkok, military brass in Manila, and an invitation from a mysterious source in the South Pacific.

Allied with the granddaughter of an infamous Indian rebel, the crews of the Daedalus and Percival must infiltrate an uncharted island under siege by the same Silver Star forces who took Rivets, defend the innocent natives, thwart the demonic summoning rituals and human sacrifice occurring there, and rescue their comrade from a horrible demise.

Airship Daedalus: Legend of the Savage Isle follows in the footsteps of classic pulp adventure tales like Doc Savage and The Shadow, as well as modern pulp properties like Indiana Jones and The Rocketeer, set in an alternate “decopunk” world of weird science, lost worlds and occult danger.

“Airship Daedalus is a fantastic throwback to the days of high-action pulp fiction and weekly comic strips filled with intriguing plots, sharp heroes, and mysterious villains.” 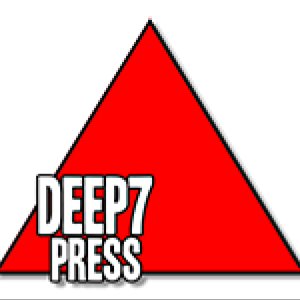 Deep7 Press began in 1999 as the business partnership of Ron Dugdale with Todd and Samantha Downing. Their goal was to help usher in the digital age of adventure gaming by publishing quality roleplaying content in electronic format. Foremost among the early products was the 1PG line of rules lite RPGs. Ron left the company in 2002 after the release of the company's premium fantasy RPG Arrowflight, while Todd and Samantha went on to publish the official Red Dwarf RPG, the film noir game Mean Streets, and many others. Samantha died in 2005, and Todd eventually returned to game publishing with the post-apocalyptic RADZ, followed by the second edition update of the Arrowflight line.

Airship Daedalus – A Shield Against the Darkness!